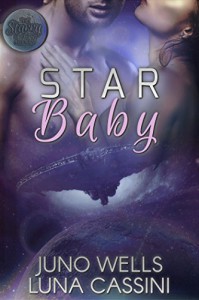 When Caia Roberts loses her job and her fiancé on the same night, it feels like the world just doesn't want her to be happy.

Luckily, there are other worlds in the universe. And the Starry Eyes Agency specializes in finding hot, eligible aliens for single Earthlings. They find a possible future husband for curvy Caia: the young and drop-dead gorgeous King Cerar'ik of Apraxi. Caia is so taken with his picture, she leaves Earth on the next starship.

When she gets to Apraxi, the king's officials shower her with honors and luxury. Everyone wants her to marry the king and become their queen, ready to bear heirs to the throne and save their troubled and almost woman-less kingdom from ruin.

There's just one catch: Caia is already pregnant. By Prince Axar'oq, the ridiculously hot black sheep of the royal family and the king's own brother...

This book has a great deal of what I like in a Science Fiction Romance: intergalactic dating service, artificial intelligence, aliens ....

However, the tone balance in the book is off. It is high camp in one moment and then tackling racism and police violence in another. This can of tone switching can be pulled off but it isn't here. The high camp just feels silly and I end of doubting the character of the heroine who would trust a dating agency acting so strangely.

I will also admit the switch of heroes isn't my cup of tea. There is good writing here but it is uneven.