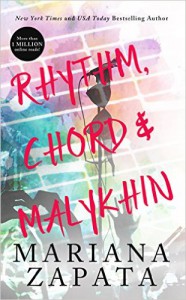 Twenty-six-year-old Gaby Barreto might be a lot of things (loyal, sarcastic, one of the guys and a pain in the butt depending on which family member you ask), but dumb isn’t one of them. When her twin brother invites her to go on tour as his band’s merch girl, she isn’t exactly screaming at the top of her lungs with joy.

With no job opportunities pounding on her door, an ex-boyfriend she would still like to castrate, and no end in sight to moving out of her parents’ house in Dallas… it would be dumb to say no to the chance of a lifetime. Two bands, three continents, one tour. Spending the next ninety-plus days with three beloved idiots and eight complete strangers shouldn’t be a big deal, right?

If only the singer of the headlining band didn’t have tattoos... a great personality… a fantastic body… and if he wasn’t so funny….

Let’s be real: Gaby never had a chance against Sacha Malykhin.

This book has the crude humor of Zapata's first book Lingus and like Lingus it is in the end a sweet slow burn romance.

I enjoyed the romance. It did feel in places as if the book is trying to catch the trend of Rock Star New Adult romances and that dampened the fun a bit.

However, Zapata is a unique writer who does friend's to lover's romance better than anyone. There are lots of surprises of character complexity here to be treasured.