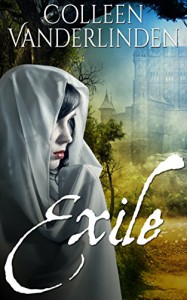 Two races fight for what remains of a dying planet.

For generations, the Maarlai, an alien race who fled the destruction of their own home world, have lived silently, hidden, exiled on Earth. They watched, year by year, as humanity destroyed what was once a planet full of hope and promise.

Unable to idly watch as the planet dipped further into destruction, the Maarlai left their hidden villages and went to war with what was left of humanity. With the death of the last great human king, the Maarlai found themselves victorious and vowed to protect and restore the planet that had sheltered them for so long.

A treaty made, an alliance formed.

Shannen of House Lyon is a member of the last of the human royal families. While they bend knee to the Maarlai ruler, her people have not forgotten their former greatness, the years of bloodshed and horror... or the memory of their fallen king.

To ensure a lasting peace between their two peoples, Shannen and three other prominent human women are sent to the Maarlai capital. One of them will wed the future Maarlai king, cementing the peace between former enemies.

When Shannen finds herself married to the Maarlai warrior, she discovers a whole new world... and freedom unlike anything she could have imagined. When war threatens once again, she will need to decide where her loyalties truly lie.

I forgot that Vanderlinden writes Sagas! Ahhggghhh. We are in for a long luscious ride with this series.

There isn't really a cliffhanger but more of much more to go in this tale.

The alliance marriage makes this feel more like a medieval with aliens and thus a fantasy romance that a science fiction romance but the mash up is well done.

The hero comes to cleave to his wife and the heroine comes into her own power. She is a bookworm which I love and never passive about anything but practical.

The pace is sedate but lots is happening and the love story could be more detailed but you feel it.

Let's see what happens next!