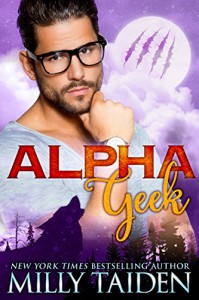 Lioness shifter Scarlett Milan hates that she wants her boss more than her next breath. All she thinks about is how his black-rimmed glasses and bow tie are sexier on him than any other man. But since he’s human, she’s afraid she could break him, even kill him, during a night of wild sex.

Knox Daniels, wimpy bean counter, has lusted after Scarlett since the moment he met her. The fact she’s his best friend’s little sister has stopped all dirty thoughts. Well, almost. After he breaks up with his girlfriend, getting his hands on Scarlett is the first thing on his to-do list. Being murdered was not.

A vicious attack almost kills Knox, but science comes to the rescue. Now he’s no longer the weak human Scarlett was afraid to touch. Actually, no one knows what he is except possessive, aggressive, and demanding she be his. They’ll have to team up to keep him alive while figuring out if he’s a deranged killer or just the most powerful alpha ever known.

This is fun read. I love the hero and the heroine seems pretty cool.

The problem is we just get a quick sip of everything in this book. The love story, character development, and overall plot. I liked it but it wasn't fulfilling without further development.