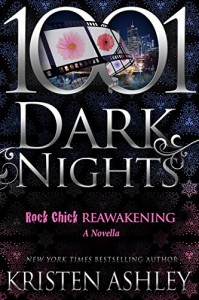 Rock Chick Reawakening shares the tale of the devastating event that nearly broke Daisy, an event that set Marcus Sloan—one of Denver’s most respected businessmen and one of the Denver underground’s most feared crime bosses—into finally making his move to win the heart of the woman who stole his.

I like all the other rabid Kristen Ashley fans have been waiting for this book.

And it was wonderful. I think even if you hadn't read the series, you would think it was wonderful But I have read (and reread Rock Chicks) and so I read this one twice in a row with pleasure.

Ashley does a great job telling the backstories of the characters we have known so long and showing Marcus fall hard and instantly and Daisy fall in love.

The sorrow of the events that marked Daisy are done it way that makes an argument for the senseless and the attack of power and misogyny that exits in sexual assault and the reality of living as a survivor and loving a survivor.

It is a love letter to all those who have suffered. T

he book is also just plain sexy fun with glitter, bell like laughter, hot looks, walk ons by favorite characters and the signature Ashley lush lush epilogue which takes this little novella into the land of fairytale in a good way.